Company co-owner Phil Gilardi praised Mark as a key contributor to the success of the company. “Mark’s 25 years of dedication and ‘do whatever it takes’ attitude have been instrumental in the growth of Freshway,” Gilardi said. “Mark was the first member of our management team, and he helped us build the business in the early days, when resources were scarce.” 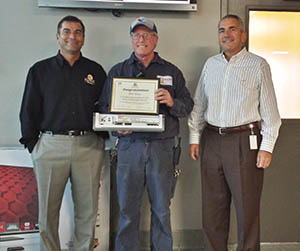 The company awarded gift cards and a 55” HD television to associates who qualified for the company’s quarterly incentive program drawing. Associates qualify for the drawing by maintaining perfect attendance and a positive safety record.

In addition to the quarterly incentive program drawing and service awards, the company holds an annual company picnic and a health fair for associates and their families. Freshway Logistics, the company’s forward distribution and logistics company, also awards its drivers for achieving safe driving milestones with membership in the Million Mile Club.