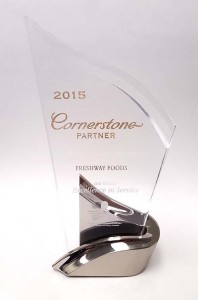 Freshway Foods announced today the company has been award the Cornerstone Partner Award by Gordon Food Service. The award, which is the highest that Gordon Food Service bestows, was announced at the 2015 North American Vendor Involvement Process (VIP) Award Dinner. The Cornerstone Award recognizes suppliers who excelled in service metrics and exemplified strategic distinction through extraordinary efforts.

“We are honored to receive this award, which recognizes the hard work and dedication of our 400+ associates,” says Devon Beer, President and COO of Freshway Foods. “It is a pleasure to continue to partner with Gordon Food Service to drive business growth and deliver the highest quality products and services,” he adds.