Freshway Foods announced today that Patsy Naseman, 28-year veteran of the company, is retiring. Patsy was the first associate hired when Freshway Foods was founded in 1988, and she will retire in May 2016. 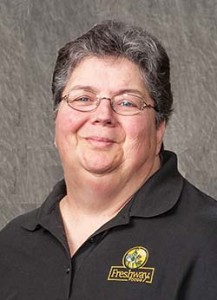 Patsy is originally from Kettlersville, a village in Shelby County, Ohio. The oldest of eleven chidren, she graduated from Anna High School. Patsy worked for several years in the hospitality industry before joining Freshway Foods.

“My first job was waitressing at Hornes Restaurant in Sidney, Ohio,” Patsy says. “I also had jobs tending bar and housekeeping, but with the economy and raising two kids, I knew that wasn’t getting it,” she adds, “so I went back to school.”

Patsy graduated from Edison State Community College in Piqua, Ohio, with an Associates degree in Accouting. She also completed a program in office machinery at the local vocational school. After graduation, she worked at the A.M. Gilardi & Sons company in Accounts Receivable for about a year.

“I kept in touch with Frank and Phil after leaving A.M. Gilardi & Sons, and they contacted me when they founded Freshway,” Patsy remembers. “I was the first person hired at Freshway, and at the time, I shared a small office with Frank Gilardi,” she adds. “Phil had an office around the corner, near the production area, and we were the only people in the office. Our production area was one big room where lettuce was produced, and off to the side was a small specialty room for broccoli, caulilower, and other items.” 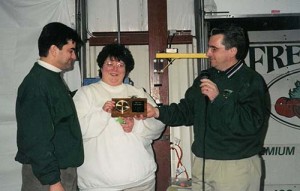 Everyone pitched in and did what was needed in the early days of the company. Patsy handled payroll, accounts payable, accounts receivable, and she remembers one time she helped pick tip burn out of lettuce. “That was a new and interesting adventure,” Patys says. “I’m on top of this ladder above where the lettuce is coming down, and after awhile it felt like I was moving and the lettuce was standing still,” she adds. “I only did that a couple of times, and I told Frank I didn’t want to do that anymore.”

As the company grew, Patsy moved into the customer service role she holds today. “I didn’t want to work in customer service at first; I was more comfortable doing the books,” she says. “Frank convinced me to try it,” she adds, “and I guess those years I spent working with the public helped. In fact, my whole career has been working with people.”

“Patsy has taken orders from every customer that we have ever had, and to this day there are customers who only want to give their daily orders to Patsy,” says Phil Gilardi, Owner of Freshway Foods. “For over 28 years now, Freshway Foods has built a reputation in the marketplace as a customer-friendly, customer-first company that is easy to do business with and a pleasure to work with on a daily basis,” Gilardi adds. “Patsy had a lot to do with this. Since the very first day Patsy has been on the phone with our customers, taking their orders, responding to special requests, all through her positive, beautiful personality. To this very day that culture is alive and well at Freshway Foods.” 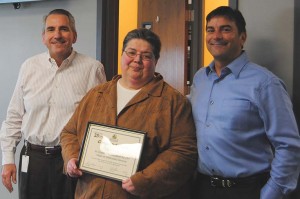 Patsy will be missed by many at Freshway. “Patsy has been a fixture at Freshway in the time I have been here,” says Devon Beer, President of Freshway Foods. “She is the only thing about Freshway Foods that hasn’t changed. You could count on her being here every day and you could count on her to be a total professional when it came to servicing our customers,” Beer adds. “No one knew their business better than Patsy. She is loved by her co-workers and customers, and will be sorely missed.”

Although much has changed in the 28+ years Patsy has been a member of the Freshway team, some things have stayed the same. “The basics haven’t changed,” says Patsy, “We are still customer service driven, and we do whatever it takes to serve our customers.”

“Frank and I have learned a lot from Patsy, and Freshway is a better company because of people like Patsy,” says Phil Gilardi. “I hope that Patsy will stop by from time to time to see the team and perhaps…pick up the phone and take a customer’s order.”

After her retirement, Patsy plans to read  and visit with family. She plans to stay in the area and will stop by Freshway from time to time to say hello. “I will miss the people the most – they are like family,” she says. “Everyone here is friendly and willing to work with you if you have questions,” she adds.

With over 28 years of service at Freshway Foods, Patsy Naseman has seen it all. “It’s fast-paced, it’s fresh and it changes fast,” she says. “One day you’re fine, and the next day nobody has lettuce.”